In August 2006 a terrible tragedy has befallen the L- Shape Lake.  The algal bloom over the summer suddenly crashed after thunder storms on several of the lakes.  However the subsequent bacterial bloom reduced the dissolved oxygen levels within the lake to a level where fish started to die.  The lack of pond weed in the L-Shape meant that the ability of plants to replace some of the dissolved oxygen was not there.  The impact of the algal bloom in other lakes was buffered by their weedy nature.  Emergency oxygenation kits from the Environment Agency were deployed as soon as the problem was detected however they had little impact as the bacterial bloom merely consumed the extra oxygen being put into the water.  All in all approx 600lb of fish died and had to be buried on site.  Mainly pike, perch, tench and bream.  It is not known how many large fish survived, however the assumption is being made that this was a total fish kill for all species over half a pound.  Smaller fish did survive, mainly pike and perch, that seemed to be able obtain oxygen from shallow weedy water in the margins.  Restocking will take place once it has been determined that the lake has totally recovered. 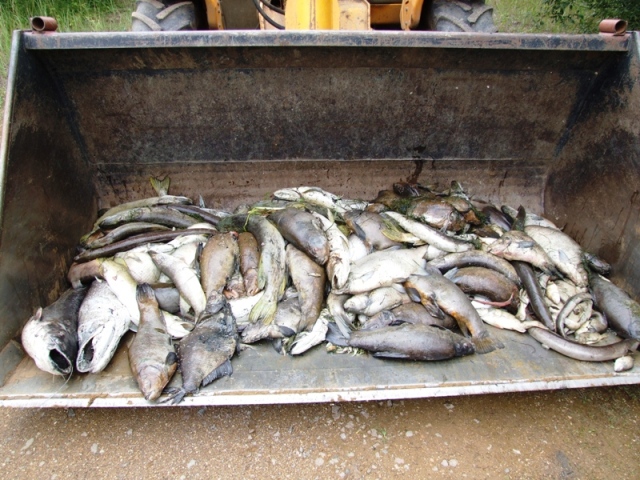